With our wounds still raw following relegation from league 2 to league 3 last season, Penicuik approached their first game against Edinburgh Rotary in September fully determined to leap back to league 2 in one season; and proceeded to get thumped 10-2! We started the game well, but the wheels came off as early as the second end, and there was nobody in the team able to put them back on again!

Despite this reduction in selection choice, the team bounced back from the early setback and put in a solid performance for the remainder of the games: November, a 5-3 win against Bank of Scotland; December, a 7-4 win against Holyrood; February, a 6-4 win against Watsonians; and March, a 7-2 win against Merchiston.

At the end of the season we ended up on equal points with Bank of Scotland at the top of the league, their only defeat coming against us, but our heavy defeat against Edinburgh Rotary put us well behind them on ends and shots. No matter, two teams are promoted and the winners of the three Province Leagues are finally decided by play-offs between the two top teams in each league. Traditionally, these games take place on the same night and are followed by a dinner. The grand play-off was due to be played on 26th March but sadly, for obvious reasons, this was cancelled.

So back to league 2 next season. Possibly something to look forward to in these difficult days?

As you will all be aware Murrayfield Curling Rink closed on 18th March until further notice.

In the few days before the closure and in view of  the latest Government advice on Coronavirus, it was left up to individual Skips  to decide whether or not they would play their remaining matches. Most had justifiable concerns over their own health or that of family members.  As a result, only one of the two Thirds games was played on Monday 16th, and neither of the two remaining Kettle games was played on Wednesday 18th.

With no way of knowing how long Murrayfield will remain closed, or Rule to cover these extraordinary circumstances, it has been agreed that the results of  the Kettle and Thirds  competitions will stand as of now.

Many congratulations to Iain Scott and his rink of Ken Hunter, Barbara Gillespie and Jenny Wray on winning the Kettle League, after a very closely fought final few matches where in fact any one of three or four teams were in contention to win.

Also many congratulations to Craig Brown, in his first year as Skip for Penicuik, and his team of David Ballantyne,  Kirsty McWilliam and Frank Duffy on winning the Thirds League.

It is  increasingly unlikely that the Annual Dinner and Prize-giving will go ahead this year but hopefully the winners of all the Competitions can be presented with their Trophies at some point in the near future.

Enjoy your summer and keep well.

Many congratulations to Margaret Carr and her rink for winning the Alpha Challenge Competition on 8 points. Margaret’s team was drawn from her pool of players which included Dave Carr, Christine Hope, Janette Lambie and Jim Ramsay.

This was a very closely contested competition with each of the four Rinks playing each other twice over the last three months of the season. In the end it was all down to the last games where Margaret’s rink beat Ronnie Hope’s by 6 stones to 4, leaving Ronnie’s rink finishing as runners up on 7 points. Full results below.

The Second Points Competition was held on Monday 9th March at 5.30pm.

Only seven members played in this latest ‘skills test’ after a couple of late call-offs due to illness. In starting order, the participants were Jean Noble (the only lady present and very nervous at having to play first), David Ballantyne, Jim Cowper, Iain Scott, Reg Dunbar, Dave Anderson and Ronnie Hope.

The competition was played on Sheets 1 and 2 and there did appear to be some difference in the way the shots played out. However, the competition flowed smoothly with lots of words of encouragement or otherwise between players. 9 out of the 10 disciplines were completed before the bell, although no-one managed to score in all nine.

Many congratulations to Reg Dunbar who came out a deserving winner on 37 points, at the end of a very competitive tussle with Iain Scott who finished second on 33 points, and Dave Anderson on 31 points. The top scorers in each discipline were as follows;

Drawing Thru the Port   David Ballantyne (2)

Jean, as Sponsor, would like to thank all who took part. (Her only consolation was that she scored more than her previous attempt last year). However, playing Points is a great way to gain more decision making and shot experience so we would encourage everyone to try it.

In the first rounds: team Scott and McWilliam won against Hope and Dawe,  team Lambie and Noble won against Anderson & Lambie(J),  team Carr(D) and Ballantyne beat Jacobs and Mauchline(M) whilst team Carr(M) and Dunbar won against Brown and Anderson(L).

In the Low Road semi-finals, Anderson(D) and Lambie(J) beat Hope and Dawe whilst Jacobs and Mauchline beat Brown and Anderson(L).

A short rest now for the Low Road finalists whilst the High Road semi-finals were played out.

Whilst Lambie and Noble didn’t quite get the breaks with their shots, Scott and McWilliam were getting everything right. Kirsty was chasing her stones up the ice and sweeping them into perfect position. Despite Andrew’s best efforts Iain capitalised with his stones, winning outright by 6-0. In the other semi Dave C and David B came up against wife Margaret C and Reg. This was a closer match eventually won by Margaret and Reg 4-2 thus setting up an intriguing High Road Final.

After a bit of negotiating with the Ice Man, both Finals were played at the same time albeit at opposite sides of the Curling Rink which made it a bit difficult for the spectators.

In the Low Road Final, Dave A and Janette were all square 1-1 against John and Mike after two ends. However, they then made a 3 at the third end before clinching the Final by scoring a 2 at the last end winning 6-1.

At the other side of the ice floor, Iain and Kirsty employed aggressive tactics from the start taking out any open opposition stone and scoring a 5 in the first end before Margaret and Reg replied with a single in the next. A further 2 for team Scott left team Carr with a lot to do but they persevered and, with Iain missing a hack-weight opportunity to take shot, Margaret’s pairing took another 2 in the fourth to sit 3-7 down. With many stones in play and both sides trying to wick-in, Iain and Kirsty took a 1 in the fifth end, before Margaret and Reg conceded to end the match. Final result: 8-3 for Iain and Kirsty.

Overall the Pairs Competition was a successful and enjoyable day albeit a long one. It is fair to say that it was a bit of a struggle to get 16 players this year, so a big thank you to everyone who entered and many congratulations to the Low Road winners Dave Anderson and Janette Lambie, and the High Road winners Iain Scott and Kirsty McWilliam.

On a clear spring morning on 4th March, two carloads of Penicuik lady curlers with a guest from West Linton made their way through to Greenacres for a Social game against Duntocher Ladies. The views from the Curling Rink across Glasgow to the snow-clad Lomond Hills made the journey well worthwhile, and there was even time for a cup of hot soup before the serious business of curling started. Penicuik were joined for the day by their final team member Jane Hunter, an ex Penicuik player in her 81st years and now with Duntocher Ladies as her home club.

The format was that the two Duntocher rinks would play 4 ends each against their first Penicuik opposition then swap over to play another 4 ends against the other rink, so that everyone became acquainted.

Margaret Carr’s rink of Christine Hope Janette Lambie and Jean Noble were all square at 1 stone each after two ends before Duntocher took a 3 in the third, then Penicuik finished the first half with another single ending up 4-2 down. Liz Anderson’s rink of Pam Ramsay, Anne Lambie and Jane Hunter had a tougher starting match ending up 5-0 down after 4 ends.

However, both Penicuik rinks rallied against the different opposition in the second half with Margaret’s team reading the ice well and sweeping their stones into the head. They took 4 stones in the first, then a 3 then a 2  before conceding a single at the last end, finishing the day on a win 11-5. Liz’s team conceded another single in the fifth end against the second team then, to Pam and Liz’s great excitement, rallied to take a 3 then another two singles ending up losing narrowly by 5-6. 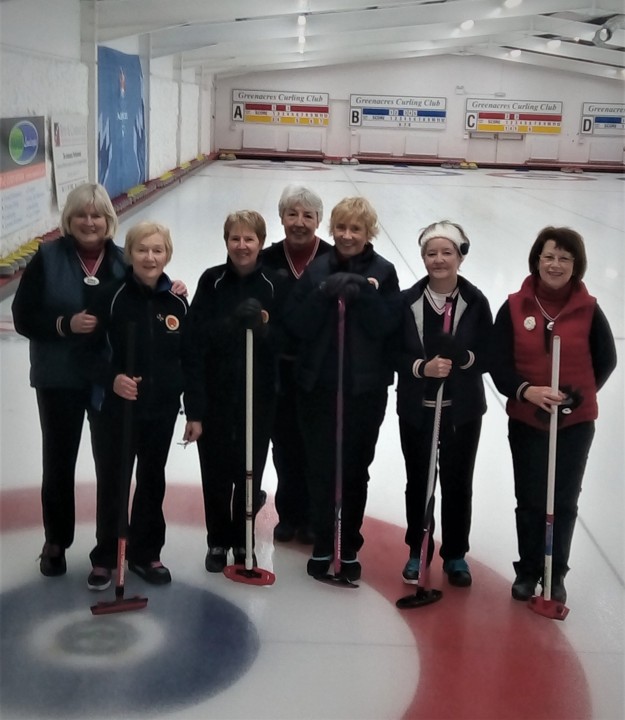 Time for refreshments after the curling. Jean missing from photo.

Curling over, we retired to the Club room for some chit-chat over tea/coffee and cream scones and the presentation of cream eggs for our win.  Liz then thanked President Jean Leach, Beverly, Jane and the other players from Duntocher Ladies  for their hospitality before we left for the long journey home. Overall this had been a very enjoyable days curling against some very friendly opposition and we will look forward to welcoming them  to Murrayfield next season for the return match. 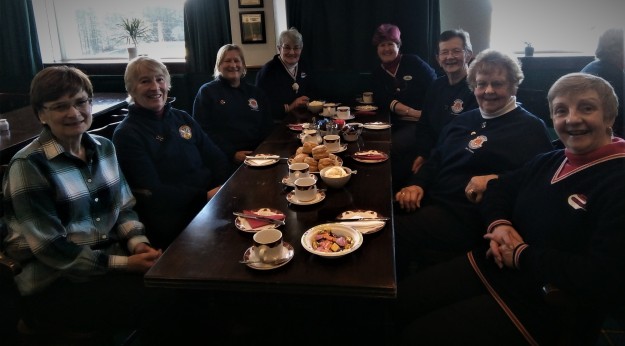 Cream scones and chat after the match.

Traditionally the Club President and Vice President field teams to play in this double rink competition. This year we were challenged by Reform Curling Club to travel to Greenacres Curling Rink (a challenge in itself) to compete for a District Medal in this competition which dates back to the mid-19th century.

Double rink competitions, where aggregate scores win out, are very interesting and great fun but sometimes nerve wracking to play in, with players having an eye on the progress or otherwise of their compatriots on the adjacent sheet.

President Liz’s rink, represented by skip Dave Anderson, Dave Carr, Ken Hunter and Margaret Carr, found their weight quickly and following a last stone draw gained 2 shots in the first end. Against the hammer Penicuik A then gained singles in ends 2 and 3. Meanwhile Vice-President Iain Scott (skip) with Andrew Lambie, Ronnie Hope and Roger Scott were less fortunate, losing singles in the first two ends; however Penicuik B got 2 shots in the third and stole a single in the fourth to go 3 shots to 2 ahead. Reform B came back with 2 shots in the fifth and in the sixth to lead by 6 shots to 3. On the other sheet in the meantime Reform A scored singles in the 4th, 5th and 6th ends to reduce the Penicuik A advantage to 1 shot. At this stage Penicuik were down by 2 shots overall.

And so to the final ends with Penicuik rinks having the hammer, Reform A drew a shot to lie guarded in the centre of the house but Penicuik A replied with a well-managed angled raise to remove the opposition stone and lie 4. The Reform skip attempted a plant but caught the object stone at the wrong angle only succeeding in reducing our advantage to 2 shots. A final draw through a port gained us another shot so that Penicuik A won by 7 shots to 3. Penicuik B were lying 4 shots but were reduced to a 2 shot advantage. Unable to take out the opposition stone, that game finished Reform B 6, Penicuik B 5.

In consequence the aggregate score was Reform Club 9 (7 ends), Penicuk 12 (7 ends) thereby a win to Penicuik by 3 shots and another District Medal for the Club.

Both games were played in excellent spirits with some very good curling from all sides and thanks are due to our hosts who helped to make this a very enjoyable day.