The annual Province bonspiel was played across Monday 28 January.  As usually Penicuik fielded three teams.  Dave Anderson skipped the first game at 10.00 am against MIdcalder.  His team included Liz Anderson, Dave Carr, and Ronnie Hope.  They came away with a 9-5 win.

The second rink played at 2.00 pm against the Bank of Scotland.  Jim Ramsay skipped a team of Ken Hunter, Roger Scott, and John Glidden.  The outcome was an 11-3 win; it could easily have been 12-1 but for a very fortunate (and somewhat undeserved) result from the opposition Skip’s final stone.

Our final game was against Corstorphine at 6.00pm, when Addrew Lambie skipped a team including John Jacobs, Iain Scott, and Margaret Carr.  Corstorphine probably represented the toughest opposition in our draw this year, and Penicuik went down to a 2-7 loss.

We finished the tournament on an average of 2.33 points.  The competition was won by Currie & Balerno with an average score of 11.67.  The Colin Black trophy for the highest up rink on the day went to Royal Bank of Scotland with a score of +14.

Our troops took up position to engage those of Merchiston on Sunday evening (27 Jan) for the annual Team Points match.  When the smoke from the opening salvos (Striking) had cleared and our skirmishers had returned (from Inwicking), we found ourselves to be just holding the opposition at bay.  However, our infantrymen gathered strength to take ground at Drawing, Guarding, Chap & Lie, and Wick & Curl In to establish a significant bridgehead.  A lead of 17 points looked unassailable, but undeterred our opponents responded with a strong late surge to almost take the day.  As it turned out the match was won with the final shot of the encounter when Trooper Hope (R) made his final shot at Chip the Winner.  Penicuik emerged victorious by the narrow margin of one point (131-130).

After the fray of competition all parties withdrew to the bar to share a refreshment and take the opportunity to review scores of contests since 1995 in the record book.  Another great evening. 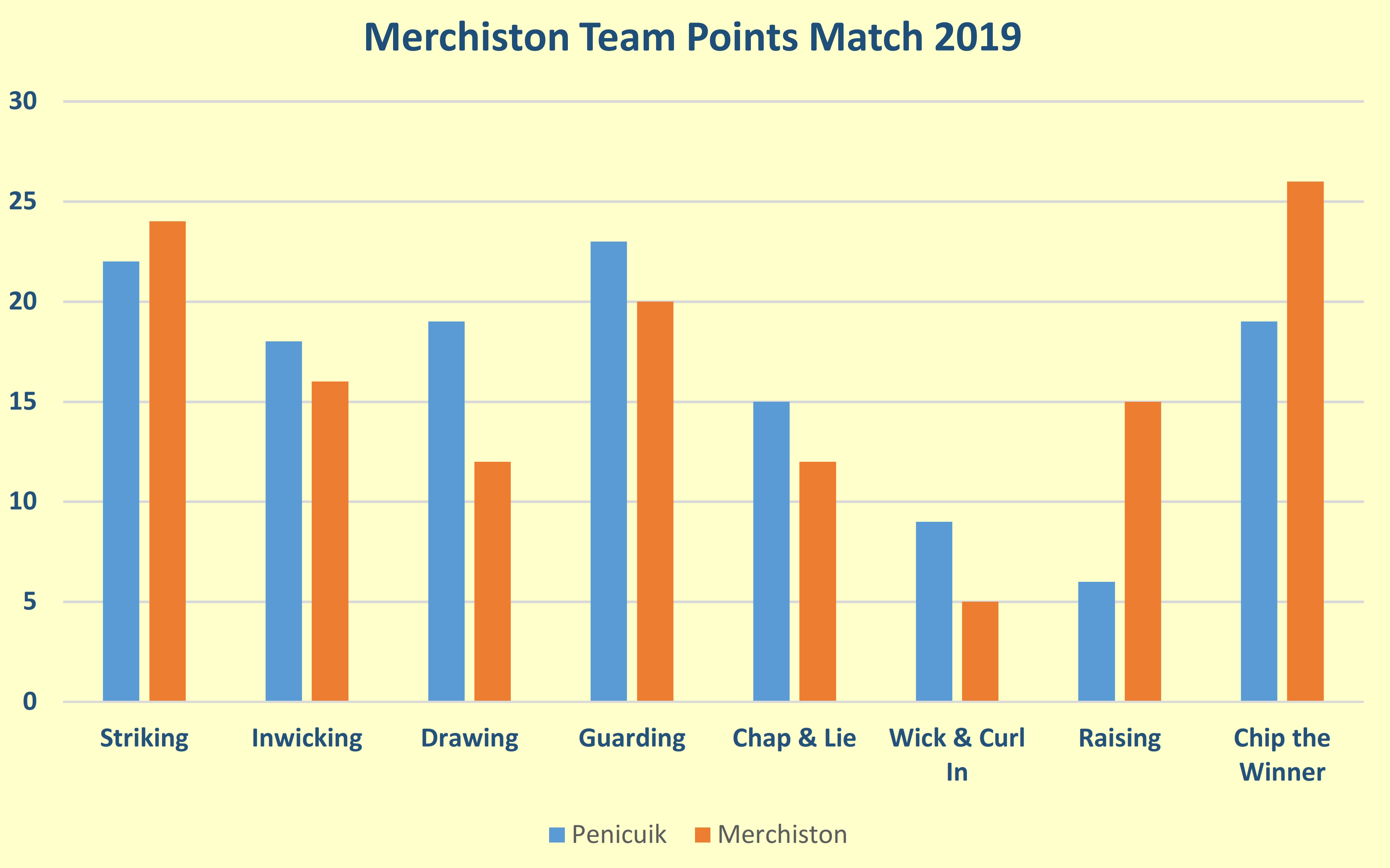 Avril Anderson , the Merchiston President, presenting the trophy to Dave Carr, Past President of Penicuik

Our club mate Carol Fleming was in the Team Sharp rink that were runners up in the Low Road of the Sellar Competition at Murrayfield this week.  Well done ladies. 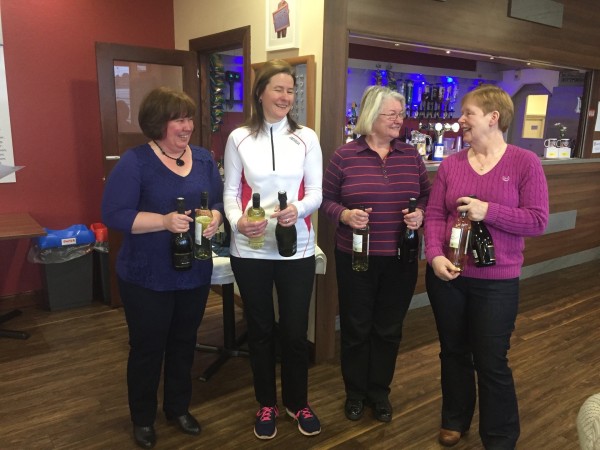 First blood went to Penicuik with a nice three in the first end.  Gogar responded with a three, then stole a single.  Andrew’s team were not firing on all cylinders, and Gogar took another three, and then a single.  Andrew drew a shot in to take a single in the sixth end to make the score 8-4 in favour of Gogar Park.  On the day, our opponents played more consistently than we did, so good luck to them in the final, and the national playoffs at Forfar in early March.

Friday 18th of February was the third challenge between our two clubs.  This year it was a home game for us.  A friendly game, Iain Scott, Liz Anderson, Pam and Jim Ramsay rotated position every two ends as did our new friends  Robbie, Duncan, Geoff and May from Partick.

End 1 was taken against ‘The Hammer’ with a single.  End 2, we were on the board with a two.  End 3 with Iain in the head, we thought we were on for a 4 or 5 until Duncan drew in to cut us to a one.  End 4 saw us gain a further 2  after our Skip guarded well.  Liz took over as Skip in the 5th end where we lost a 2.  We still don’t know what Liz was up to half way through the 6th end.  She and Geoff decided to inspect the base of one of the stones in play, in the house.  When play resumed, we were able to claim a three.  End 7 and the last end, Pamela was able to claim a 3 after Partick managed to clear their stones from the house.

Despite the 2 – 11 score, we are sure that the Partick team enjoyed their time with us. 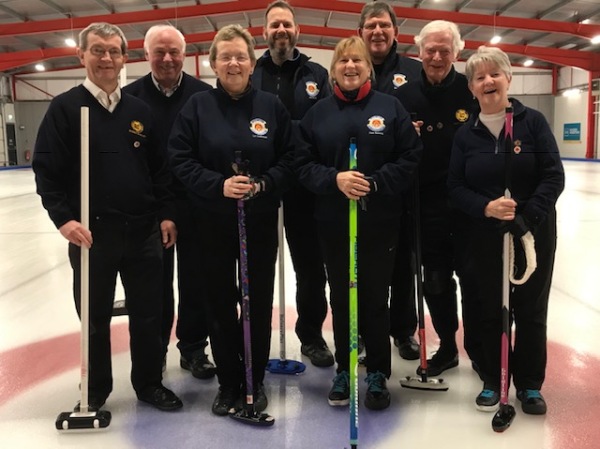 Jim Cowper, Roger Scott, Ronnie Hope and Dave Anderson stepped up to the hack for a social game against the DAFS rink of Graham Thomson, Alan McDonald, Jill Gillard and Catriona Graham

Penicuik started well with a creditable 3 in the first end and were looking good to steal a good score in the second until, having failed to provide a good guard, DAFS skip Graham played a good hit and roll for a single.  Penicuik increased their lead with a 2 in the third but with DAFS front end now finding their weight, the 4th end went their way with an excellent 3 and a steal of a single in the 5th brought the scores level. The 6th end saw Penicuik finding their way again with a single and we managed to protect a single in the last end to secure a 7 -5 shot victory.

Shot of the game was and angled take out by Roger which he played superbly well despite being told by his team mates that it might be above his capability.  It was noted that Penicuik front end had a combined age of around 160 years. There’s life in the old dogs yet.

Our thanks to Graham and his team for joining us in a game played in the best of spirits. All involved enjoyed the evening.

The Annual “Merchiston 1816” match to celebrate the first match between Merchiston and Penicuik took place on Friday 11th January.

The ice was fast and very swingy, making calling on strikes very tricky.  Penicuik got the pace of the ice sooner, and built up a steady lead. Chris Morrison was repeatedly asked to play tricky saving shots which didn’t quite come off.  So, Penicuik went into the last end with a comfortable 7-2 lead. Merchiston’s early stones were all taken away but they managed to score with their last 3 stones.  An ambitious double take out by Keith just drew too much, allowing Chris to draw with the last stone for a three to make the final score 7-5.

After the game, we went upstairs for the usual pleasant chat and refreshments.

The ice was particularly dour in the first end; Corstorphine adjusted better,protected two early counters and went on to draw two additional shots for a four.  They then managed to steal a single in the second end to go 5-0 up.  Penicuik responded in the third end, getting the better of drawing around corner guards.  Andrew drew to the centre front of the house with his first shot to protect three shots whilst Corstorphine failed with an attempted raise.  Andrew then raised his own first shot to get a four.  Corstorphine played well to take a single in the next end to go two up, but Penicuik came back with a two in the fifth end to reduce the deficit to one shot.  Corstorphine were held to a single in the sixth end and led 7-6.  In the seventh end, Dave Anderson played a fine raised take out through a fairly narrow port to leave Penicuik lying shot.  Andrew was able to get a good draw into it with his first shot, and subsequently made an excellent draw to freeze on his first shot leaving the opposition with no choice but to attempt a draw to the pot lid;  the weight or sweeping was just off and Penicuik took a two to go into the lead (8-7) for the first time in the match.  Penicuik took the early initiative in the eighth end and were lying quite well, but Paul Davis (Third) got a great result from a take out, not only removing the target stone but also removing two other Penicuik counters.  Andrew drew in with his first shot for Penicuik to lie with two shots one of which was then removed.  Andrew drew in again with his second shot but keen sweeping took the stone perhaps just too far to leave Corstorphine the chance of a slight tap back to tie the match.  The final shot may have been slightly wide, limiting the options for sweeping and it just moved the Penicuik counter slightly without gaining shot.  So Penicuik progressed (9-7) to the semi-finals on Saturday 19 January to play Gogar Park.